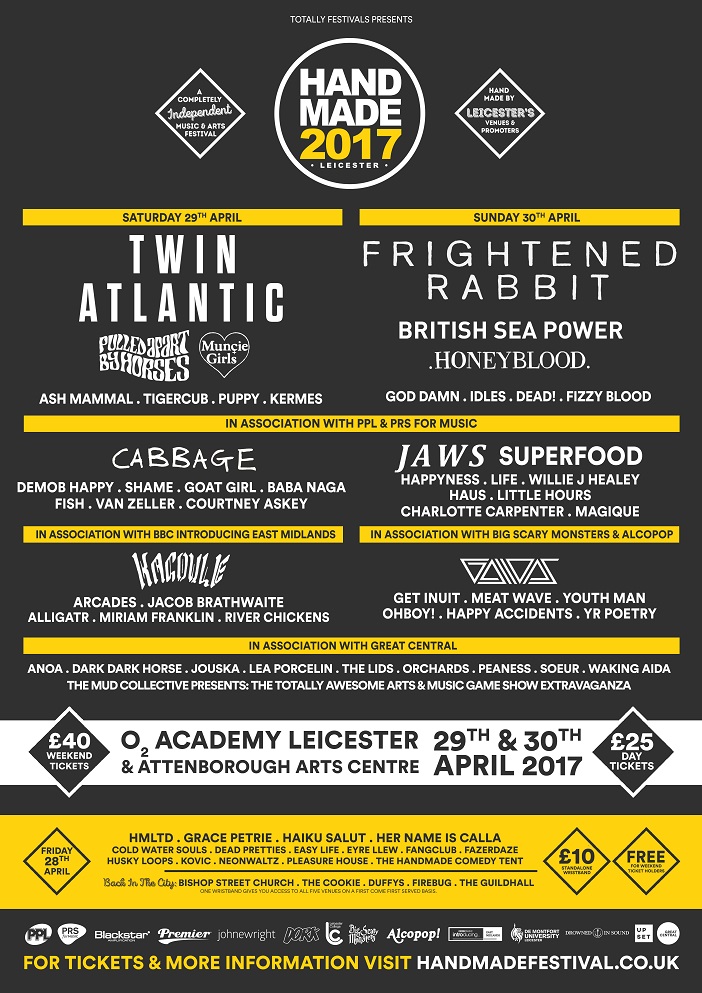 Handmade Festival will be returning to Leicester’s O2 Academy in 2017 for two days of the finest music, comedy, art, film, performance and photography, hand-picked and carefully curated. The festival will take place on 28th, 29th and 30th April 2017.

At the start of the year Handmade Festival announced the first two waves of bands for the 2017 music programme including:

The new programme (which is free to festival wristband holders or £10 for those that won’t be attending the full festival) features a stage curated by Drowned In Sound, as well as a stage curated by long time friend of the festival and ‘Leicester folk hero’ Grace Petrie (who will also be performing).

This new programme of shows will take place on Friday 28th April 2017 at the following local venues across Leicester: Firebug, The Cookie, The Guildhall and Bishop Street Church, plus it will see the return of The Handmade Comedy ‘Tent’ (which isn’t actually a tent).

Alongside the final announcements, Handmade Festival have also announced that PPL and PRS For Music, ahead of the launch of their joint licensing venture in Leicester later this year, will be sponsoring the second stage at the festival, which features headline appearances from Cabbage, Demob Happy, Jaws and Superfood.

Tickets start at £40 for adults and for the first time the festival is able to offer tickets at £30 for students and £20 for under 16s.

Handmade is a multi-venue music and arts festival in the city of Leicester. It was originally imagined by John Helps (of Leicester based instrumental band Maybeshewill) as a way to bring exciting new and original music, comedy, art, film and photography in to the city centre over three days. Since then it has grown and is now programmed and run by John along with Nik Sharpe (The Cookie), Matt Kirk (Firebug) and a tonne of other awesome people across multiple artistic disciplines. Partnerships with Big Scary Monsters and Alcopop Records as well as the 2000 Trees and ArcTanGent Festivals have been a big part of the Handmade from day one, and it continues to involve curators from awesome musical organisations from across the country.

In its first year Handmade took over reclaimed spaces – including an ex-library, the city’s historic guildhall, a church and some of the oldest buildings in the city with headline sets from Rolo Tomasi, Nine Black Alps, Dutch Uncles and The Twilight Sad as well as festival curators Maybeshewill themselves.

For its sophomore year, the event grew to include the huge Hansom Hall theatre, with And So I Watch You From Afar, Shonen Knife, Dry the River and Iliketrains filling headline slots across the many venues.

2015 was another year for growth, necessitating a move to the city’s O2 Academy venue – with headline sets from Eagulls, Bo Bingen, TOY, Slaves and Future of the Left filling the spectacular Queens Hall, Scholar and multiple re-purposed spaces around the building, the event saw festival organisers vindicated – creating the perfect “DIY” festival within what would normally be considered a particularly “un DIY” venue. It was a different beast, but it was the perfect festival for the city.

2016 saw the festival’s biggest and most adventurous year yet featuring bands such as We Are Scientists, 65daysofstatic, Lonely The Brave, Deaf Havana, Three Trapped Tigers and more. 2016 also saw the festival partner with Upset, Last.fm, Witchita Records and more to curate their estimable line-up, earning them plaudits from the likes of Drowned in Sound, Louder Than War, Q, Clash and various other areas of the press.

Speaking about the festival co-organiser John Helps, said “It feels so good to finally get this announcement out in to the world. Handmade has grown every year since we started it in 2013, but this feels like our biggest step to date as we move in to the main room of O2 Academy Leicester, as well as the many other spaces around the Academy and Attenborough Arts Centre. We could not be more excited about the line-up, and this is just a flavour of what you can expect across the two days.”

This year the festival is partnering up with old friends Big Scary Monsters and Alcopop records as well as new friends at Upset, Dork, Drowned in Sound, PPL, PRS and more, to bring you another eclectic and vast line-up. More acts to be announced soon.

PPL is the music licensing company which works on behalf of record companies and performers to license recorded music played in public (at pubs, nightclubs, restaurants, shops, offices and many other business types) and broadcast on TV and radio across the UK. Our members include major record labels and independents as well as globally successful performers and session musicians, ranging from orchestral players to percussionists and singers. PPL also operates an international royalty collection service helping members to get paid when their music is played internationally.

About PRS for Music

PRS for Music represents the rights of over 118,000 songwriters, composers and music publishers in the UK. As a membership organisation it ensures creators are paid whenever their music is played, performed or reproduced, championing the importance of copyright to protect and support the UK music industry. The UK has a proud tradition of creating wonderful music that is enjoyed the world over and PRS for Music has been supporting the creators of that music since 1914.

For all press and accreditation enquiries please contact Will Vincent on
will@prescriptionpr.co.uk or +441223 505328